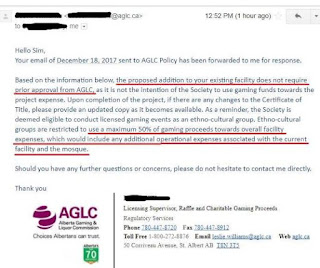 At a special membership meeting held on December 10, shortly after the pre-application meeting we attended at the City of Edmonton, a few of our members who had also raised objections to the Mosque Project in the November 2016 meeting raised the issue that AGLC might not approve the building of a mosque at the current TCS property.

Our Externatal Relations Coordinator Sim Senol submitted a formal message to the AGLC to get their approval, explaining to them that TCS has no intention to use any gaming funds during the construction of the mosque project. Today, we received confirmation from the AGLC that no prior approval is required for such a building project, provided that we do not use any gaming funds. This is yet another hurdle that was presented to the TCS Board by a few dissenting voices among the Turkish Canadian community. We were able to clarify the regulations and put everyone's minds at ease within the Turkish community. Despite past failed efforts, we are hopeful that a mosque can be built in this location.
Posted by TCS Webmaster at 6:44 PM