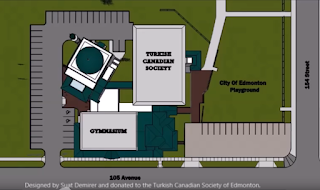 TCS Board and our volunteer designer goes back to the drawing board, to re-think and re-design the project. We will especially have to put our Phase II - Cultural Centre plans on hold, as the parking and landscaping requirements will be impossible to meet.
Posted by TCS Webmaster at 5:19 PM