Design Concept for the Turkish Canadian Mosque presented to the community 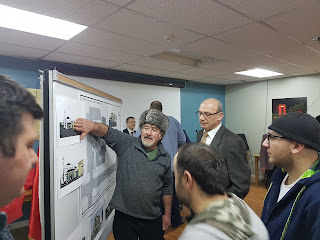 On November 24, 2016 our volunteer project designer Mr. Suat Demirer presented the initial design concept for the Turkish Mosque to a packed audience at the Turkish Canadian Society. In addition to more than 100 community members Consul General of the Republic of Turkey in Vancouver, Mr. Anıl Bora İnan and the Turkish Religious Affairs Attache Mr. Mahmut Demir attended the presentation. 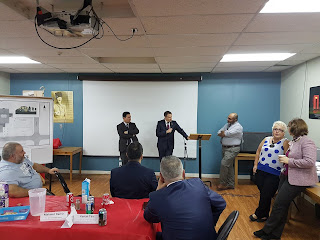 During the meeting members of the Turkish community showed overwhelming support to the project when the Turkish Canadian Society Board of Directors asked for members' approval to go forward with the development plans and the project as designed by Mr. Demirer. Only one member raised objections citing Mr. Demirer's Canadian qualifications. The Board assured members that they would be working with a licensed architect that will review and approve Mr. Demirer's design. In the end the project was approved with 2 nays and 127 yays.  Turkish Canadian Mosque project got its official kickstart on this day.

Posted by TCS Webmaster at 4:32 PM